Whether you’re prepping for the worst case scenario or looking for a fan that can keep you and your family cool on your camping trips, these five solar fans operate purely from the energy from the sun. We’ve made an effort to try to include a variety of different shapes and sizes of the fan so that there is something for everybody.

Typically these fans include a detachable solar panel, which is used to absorb the energy from the suns rays and convert it into electricity for use in the fan. When attached, the light will power the blades and keep you cool throughout the day. Plus, the best solar fans can store energy, so that they can even run in the night when there is little to no light from the sun.

How We Choose Our Ratings 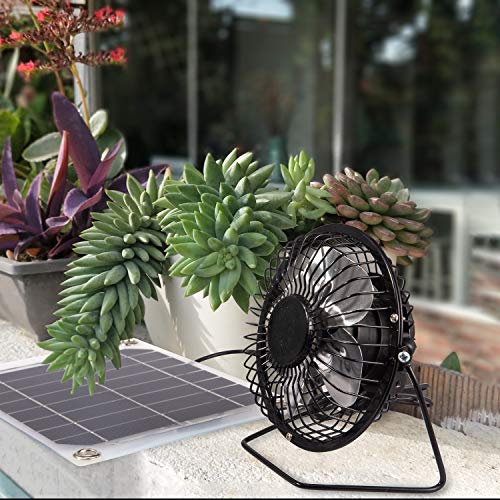 When you’re reading reviews about any product, it’s critical that you understand how the reviewers came to their decisions. Otherwise, the conclusions are nearly useless. After all, bad technique can lead reviewers to score products when compared to their true value improperly.

For us, we believe that the best way to decide on the quality of a product is to consume as many reviews as possible. This strategy means that we do excessive amounts of research into the products that we are recommending, including researching how the products work and also what separates them from the competition.

Once we have done this research, we can narrow down our selection to a more manageable number of choices, at which point we can start to compare each and score them relative to one another. Throughout this process, we like to keep our customers, you, in mind, so that we are only recommending products that we think you will love.

For us to do this fairly, it’s important for us to use a consistent scoring mechanism, involving the quality, longevity, durability, effectiveness, and aesthetics of the products that we are reviewing. We hope that through our detailed research we can make your life easier, allowing you to buy a solar fan without having to worry. 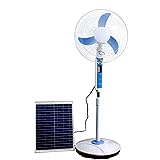 While some of the fans that we’ve discussed so far on this list are relatively small and only ideal for a single person, the Cowin Solar Fan is arguably one of the best solar fans on the market, especially for this size. The blade measures 16 inches, giving you a huge amount of wind when compared to the competition.

If you forget about the fact that it’s completely solar powered, it’s comparative to any standup fan that you can find for use in your home. With three speed settings, it also gives you a level of customization that you can’t get from most other fans.

Perhaps even more importantly, is the fact that this fan comes built-in with a lithium battery. While cheaper fans only work when the sun is out, this allows you to store the power from the sun so that you can run it all night without needing direct sunlight to stay cool.

When running on low speed, the fan should last for up to 8-hours, giving you more than enough for the entire night, while it will last half as long on the highest speed setting. If you’re looking for the best solar fans for daily and extended use, it’s going to be hard to find a competitor that can come close.

One reviewer noted how she had bought the fan for a family member who was without power after Hurricane Maria and has had a bunch of people asking where they can get one too because it’s so effective.

Without a doubt, if you’re without power, you want this Cowin Solar Fan. When you’re baking in the heat of the day, you don’t want to risk buying a substandard product, especially when this Cowin fan is available for a reasonable price. Overall, it’s our favorite, by far, and we would highly recommend it. 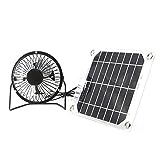 If you’re looking for the best of the best, you’ve just found it. When it comes to ‘serious’ fans, ones that are large enough to ventilate a large touring vehicle or even a small farmhouse, you need to buy the Solar Ventilator. Designed with a huge solar panel to absorb as much energy as possible, it’s capable of powering a sizable fan blade.

The solar panel itself measures in at over 8.7 inches in width and 7 inches in height, giving you a large surface to absorb sunlight. This size is particularly important if you’re in an area where the weather can be lackluster because it will ensure that the fan can still be powered even in overcast conditions.

Similarly, the panel is entirely waterproof, meaning that you can still absorb power when it’s damp and raining outside. However, you should note that the fan isn’t waterproof, but this is unlikely to be an issue because most of us are running the fans indoors to ventilate the building or vehicle.

The fan itself is relatively small, only about 4 inches in diameter, but because it spins incredibly quickly, it’s capable of generating a large amount of wind. The documentation for the product suggests that you’ll be able to feel the breeze up to 2 feet away, proving that size isn’t everything!

According to one reviewer, it’s ideal for aerating a medium-sized chicken house allowing her to ventilate the shed and ensure that her chickens are enjoying a more comfortable existence during the heat of summer.

Similarly, another reviewer noted that the lights came on almost instantly once the sun revealed itself which goes a long way to prove not only the efficiency of the solar panel but how useful it can be in even low light conditions. If you’re looking for a little extra breeze for your animals or a personal fan when relaxing in the summer, this is a fantastic choice.

While it’s not the biggest or strongest fan in the world, for a personal fan it’s more than good enough. Plus, when you consider the affordable price, we think that it’s one of the best deals on the market, especially if you’re only in need of a relatively small blade to generate a breeze.

With a 12-inch diameter fan and a 9-inch blade, this sits somewhere in-between the two previous products regarding size. Similarly, it also has 2-speed settings, again, the middle-point between the two last options.

So, why is it ranked a little lower? Well, it sits at a weird point in the market where it’s arguably quite expensive for what it offers, while the Solar Ventilator fan is an absolute bargain and offers relatively similar performance.

However, that’s not to say that the Western Harmonics fan isn’t great, it is. If you’re looking for a personal fan for outdoors when you are relaxing in the summer, it’s a fantastic option.

However, what it loses in affordability, it makes up with the quality of the product and therefore the reviews that it has received. When compared to the other products on this list, it has by far the most positive and authentic reviews, leading us to believe that it’s a high-quality option for those looking for the best solar fans.

One review noted that they were able to set up the fan in a matter of minutes, showing just how easy it is to assemble and start operating. Similarly, another mentioned that it freshened the air within their animal enclosure, ensuring that the air isn’t stagnant for the animals and doesn’t promote infection or bacteria growth. 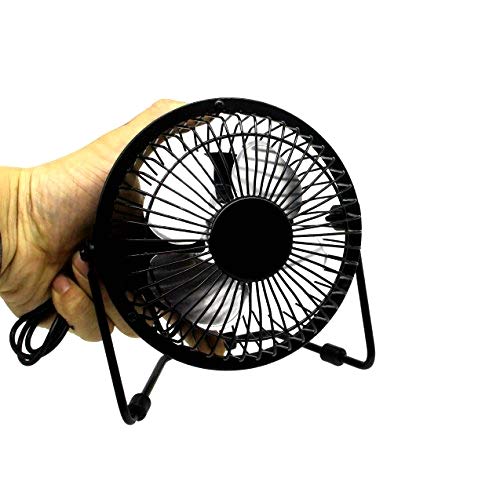 When it comes to buying a solar fan, you need to keep in mind the quality of both the solar panel and the fan. This complexity can make it challenging to find a great fan, especially given that both parts are useless without the other. You should always look at:

Solar panels and fans are both highly dependent on size, with a larger panel able to generate more power and a bigger blade capable of producing a more powerful breeze. For this reason, size should be your second most important consideration, after the quality of the parts.

Next, you’ll want to keep in mind the cost of the product. As with any purchase, the price is always critical, but when it comes to solar fans, it’s more important than usual because the difference in cost from one product to the next can be 10x or even more significant.Finally, you’ll also need to look for factors that are unique to your situation. For example, if you hope to use the fan throughout the evening if you’re camping outdoors, you’ll need to ensure that the fan you are purchasing has a built-in lithium battery to store power from the sun for using when it gets dark out.